How do I stop my cat from scratching up my sofa? 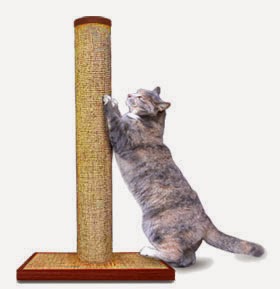 Cats love to scratch things, and if they don't have a scratching post available right where and when they want it, the thing of preference might very well be the expensive living room sofa. Why do they do that?

It is normal for cats to scratch, and they are quite motivated to do so, for a number of different reasons:


Some cat specialists also say the scratching can be used during play, and to communicate dominance.

Since this is such a big part of cat behavior, it's not realistic to try to prevent cats from scratching altogether. Make sure you have acceptable objects, such as scratching posts, in strategic places. Many posts have catnip under the outer material to make them more interesting to the cats.

In the USA, many choose to declaw their cats - over 30 percent of cats in the US are declawed. Most cat owners would reconsider that decision if they knew what it means to the cat. Declawing cats means more than just cutting nails. Declawing amputates the last joint of each toe. This is a major surgery that's very painful to the cat and can have serious side effects. Declawing cats is illegal in many countries, because it's considered cruelty to animals.

A better idea is to observe where he or she likes to scratch, and on what. Substitute similar objects that are okay for scratching.

Try to find something that's similar to whatever the cat liked to scratch. Examples of things many cats like include corrugated cardboard, carpeted posts, and logs.

Place the "acceptable" object close to the "forbidden" object, and cover the forbidden objects with something unappealing to cats. For instance, aluminum foil, double-sided tape, cotton balls with perfume, or something else kitty doesn't like.

As your cat gets used to using the acceptable object, you can move it about 1 inch every day to a location more suitable for the human inhabitants. The closer you can keep it to the cat's preferred location, the better.

Keep the unappealing coverings until the cat has used the "right" object in its permanent location for at least a month.

Posted by PlexiDor Pet Doors at 8:45 AM