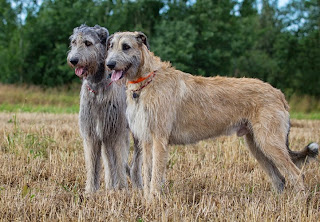 The Irish Wolfhound is the tallest dog breed. The current world record holder of tallest dog is a Great Dane, but taking an average of individuals in a breed, the Irish Wolfhound would win without contest. They are also superb athletes with great stamina, and they can run quickly for long periods of time.

This breed has been around for a long time – the oldest references stem back to Roman records from around 390 AD. Today, many think the name comes from the dogs’ ragged appearance, but they were originally bred to hunt wolves. These versatile dogs would hunt with their humans, fight in battle, guard homes, and play with the children.

Irish Wolfhounds are known for being calm, kind, dignified, and courageous. This is not a breed that gets into trouble, but they do have hunting instinct and will give chase. It might be tempting to think a dog this size would make a great guard dog, but except being big they’re much too friendly to work as watch dogs or patrol dogs. A typical Irish Wolfhound will think the best of all people, unless their own humans are physically attacked.

The mere size of the breed can be a challenge for owners – a Wolfhound standing on the hind legs can reach seven feet. The coat doesn’t require much grooming, but dogs this size require lots of room, lots of exercise, and a big car.