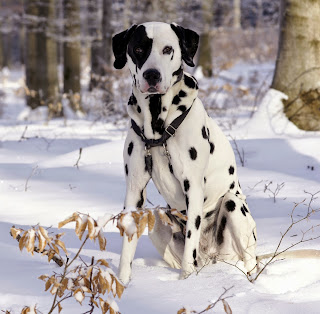 The Dalmatian is the only spotted dog breed. Its true origins are veiled in mists of time, and these dogs have been credited with many nationalities and names.

The spotted dog we know today has gotten its name from Dalmatia - a historical region of Croatia close to the Adriatic sea - but dogs of this type have appeared all over Europe, Asia, and Africa. Many believe that the breed originated in India, and there are dogs looking like Dalmatians on Egyptian tombs and in ancient ruins as old as 5,000 years.

Dalmatians have had many purposes through history. Some have been used for hunting, some as dogs of war or border guardians, and others worked as shepherds. Many dogs can do these things, but Dalmatians have a unique trait: no other breed share their talent for running with horses.

Most Dalmatians will fall in behind a horse and cart, or trot beside the shoulder of a horse even if they’ve never seen one before. This probably created the breed’s original association with firemen; it was natural for the dogs to follow horse-drawn fire engines.

These dogs are energetic and require daily exercise and training. They learn quickly and have excellent memories, and excel at obedience, agility, and other dog sports. Their endurance also makes them great search-and-rescue dogs. If you’re considering a Dalmatian, remember their past as coach dogs; they require a lot of exercise and something to occupy them.

Dalmatian puppies are born white, and their first spots appear around three weeks after birth. After a month they have most of their spots, but new ones can appear throughout life.