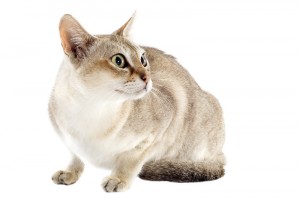 Most people can identify at least a few dog breeds. Do you know any cat breeds? There are actually many different breeds of domesticated cats, but they often get less attention in the media than dogs do.

The Singapura cat is the smallest domesticated cat breed, and adult females can weigh as little as five pounds. Adult males usually weigh between six and eight pounds.

As the name hints, the breed was believed to come from Singapore. However, the three founding cats traveled from the US to Singapore and were then brought back to the USA. One working theory is that the breed is a mix of Burmese and Abyssinian. It is still considered a legitimate breed, and according to the Cat Fancier’s Association, there is at least one legitimate cat from Singapore behind the breed.

The breed has become a tourism mascot for Singapore, they have statues of the cats, and have even hosted Singapura exhibits.

Besides being small, the breed is known for being active, affectionate, and easy to live with. They thrive on attention and love to play, but won’t get excited to the point where they bounce around the house and accidentally destroy things.

Most Singapuras have a stunning coat. Each hair has two shades; ivory at the base and brown at the tip.