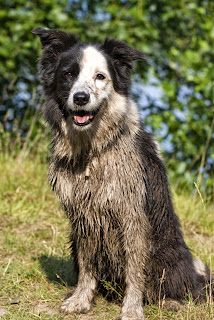 There are many great TV-shows, magazines with dog training tips, blogs, and Facebook posts helping dog owners on the way to well behaved dogs. It's still easy to miss the basics, because we forget that dogs are dogs.

Here are three good dog training tips that can help you and your best friend achieve whatever it is you want him or her to do.

1. Tell your dog what you want them to do

This sounds like a no-brainer. If I want the dog to sit, I say sit, right! The problem usually starts when the dog does something we don't want. It's easy to say "no," but that doesn't convey what you want your dog to do.

For example, if your dog jumps on someone and you say "no" or "don't jump," it's clear to most humans that it means "do something that's not jumping." A dog doesn't get that. They might try jumping higher, or to the right instead of to the left. In this example, telling the dog to "sit" would give a much better result.

Another example, if your dog is begging for something you're eating and you say "no" or "don't beg" a human would know it means, "Go do something that's not begging for my food." The dog might try begging from the other side or pawing at you. Telling the dog to go lie down can give a much better result.

It is also important to be realistic. It takes time to change a behavior. It's never too late to re-learn, but it might take some time, especially when it comes to things that are natural for dogs to do, such as barking, jumping, and digging.

3. You will get what you reinforce

A philosophy of "do as I say, not as I do" will not work on a dog. If your pooch keeps doing something you don't like, you might have reinforced the behavior without meaning to. For example, if a dog gets scared of something and you comfort them, the perception of the situation being unusual and scary is reinforced. Another good example is when a dog brings you a toy and barks to make you throw it. If you give in, the dog will know that barking is a great way to get play time. The next time when you say no the dog might try barking more, and if you throw the toy again they'll know persistence in barking pays off.