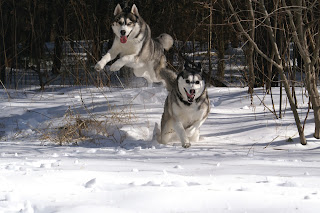 The Siberian Husky is an energetic working breed that originated in north-eastern Siberia. They are clever and good with children, but require a lot of exercise and get bored quickly. Left to their own devices without anything to do, Huskies tend to make something up to entertain them.

These dogs are active and resilient, and were originally bred to pull heavy loads over long distances in a harsh and cold climate. Huskies like to run, jump, and dig, and they need exercise every day.

The first Huskies come to North America were imported as sled dogs, but rapidly gained popularity as pets. They have a thicker coat than most breeds, and this serves them both in summer and in winter as the coat protects against arctic cold as well as reflects heat in the summer.

Siberian Huskies are pack dogs. That means they love being part of a family. They generally get along well with other dogs and they’re gentle with children, but they don’t like to be left alone.

Posted by PlexiDor Pet Doors at 8:04 AM