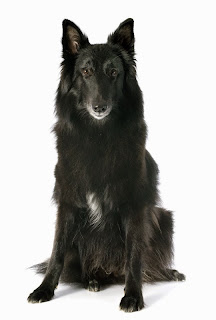 The Groenendael - or Belgian Sheepdog - is a working dog from Belgium. This breed is elegant, strong, intelligent, and easy to train.

The breed stems back to the 1800s and were originally used as herders, watchdogs, and companions. Their smarts and versatility soon made them popular outside the country of origin, and early on the Groenendaels served as police dogs in Paris and New York City, and they were famous for catching smugglers for Belgian customs.

Many other breeds declined during the world wars, but the Groenendael’s usefulness allowed them to thrive. During WWI they carried messages, served as ambulance dogs, and even pulled machine guns. During WWII they guarded military installations and watched for intruders.

In today’s world, not many need a herding dog, but the Groenendael still excels. Many work in search and rescue, as guide dogs, and as therapy dogs. They also do very well in dog sports such as obedience, agility, and tracking.

This is a high energy breed that likes to have a lot to do. They need exercise, but are able to relax in a home environment, and they’re known as devoted and gentle companions that do well with children.