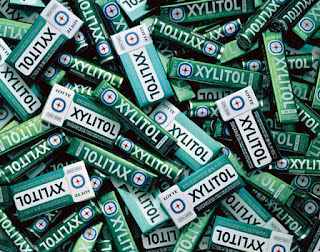 Xylitol is a popular sweetener that replaces sugar in everything from breath mints to chewing gum. It has beneficial properties for humans, but unfortunately, Xylitol is extremely toxic to dogs. Up until now this hasn't been much of a problem, because the sweetener has mostly occurred in things no one would give dogs anyway.

Lately, Xylitol has appeared in new forms of candy, and as a sweetener in peanut butter and other forms of nut butters.

This is a real problem for pet owners. Dogs love peanut butter and unless the pet has an allergy, peanut butter is considered perfectly safe. People use it for everything from covering pills to baking cookies for their pets. Read the labels. If the product contains Xylitol, do not give it to your dog.

How toxic is Xylitol to dogs?

There are many examples of substances that are a little toxic and a dog can eat some of it without serious consequences. Xylitol is not one of those.

According to the website Preventive Vet, "Ingestion of as little as 0.1 gram (g) of xylitol per kilogram (kg) of body weight (0.1 g/kg) can cause a rapid and dangerous drop in a dog’s blood sugar (a condition called “hypoglycemia”). Hypoglycemia can show as staggering, appearing disoriented, collapse, weakness, and seizures. Just slightly more than that, approx. 0.5 g/kg xylitol ingestion, can lead to debilitating, and sadly often deadly, destruction of a dog’s liver cells."

So, what does that mean?

You can count up from that. If your dog weighs 20 pounds, eating 0.9 grams of Xylitol is dangerous. And so on.

What to do if your pet eats Xylitol


If you think your pet has ingested Xylitol, call your vet, emergency vet, or the Pet Poison Helpline at once. They will ask you questions about your dog and about what he or she ate, and tell you what to do.

Has your pet eating anything toxic? What happened?