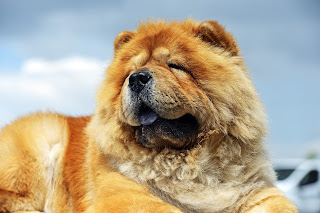 The Chow Chow comes from Asia and has been traced back to China’s Han dynasty, over 2,000 years ago, and it is considered one of the oldest recognizable breeds. It is also believed to be the model for the “Foo dogs” - the traditional stone statues that guard Buddhist temples.

Many recognize the Chow Chow because of its blue tongue - a trait it only shares with the Shar-Pei. No other dog breeds have blue tongues. This is a sturdy dog with a dense double coat. Chow Chows are generally serious, dignified, and intelligent. While devoted to family members, they are often uninterested in strangers.

These dogs are adaptable and do well in all sorts of living arrangements. They don’t need extensive exercise, and with regular walks they can do very well living in aparments. They are also a healthy breed, but they do require regular grooming. Many Chow Chow owners spend a couple of hours each week brushing their dog.

Depending on gender, a typical Chow Chow weighs somewhere between 45 and 70 pounds, and requires a large PlexiDor dog door.