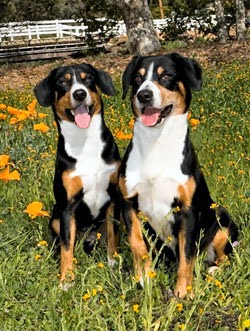 Dogs and humans have walked side by side for a long time, and dog lovers have tight bonds with their dogs. Here are ten fun dog facts you might not know.

1. Dogs aren't color blind. They can see a different range of colors than humans do, and they see better than we do in low-light conditions.

3. A third of American dog owners talk to their dogs on the phone and/or leave answering machine messages for them.

4. All paws aren't the same. Some dog breeds have webbed feet. The Lundehund has six toes.

5. Most dogs run around 20 mph. Greyhounds are considered the fastest dogs in the world, and can run up to 45 mph over short distances, but Salukis have been clocked at 43 mph - and can keep that pace over distance.

6. If you think your dog chases squirrels in her sleep, you're probably right. Dogs have the same type of REM sleep that humans do, and they are able to dream.

7. A Great Dane holds the world record as tallest dog. On average, the Irish Wolfhound is the largest dog breed, but the St. Bernard is the heaviest.

8. Allegedly, the US custom dogs "Barco" and "Rocky" were so good at their jobs that drug lords put a bounty on their heads.

9. The bible mentions dogs fourteen times. It is believed that the Canaan dog is the breed closest to the dogs of that era and part of the world.

10. Around 1,000,000 dogs in the USA are the primary beneficiaries in their owner's will. 70% of Americans sign their pet's name on greeting cards, and 58% put their pets in family portraits.

Do you have a fun dog fact that should be on the list?