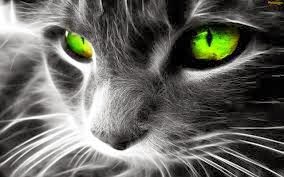 Cat lovers will agree that cats are fantastic. Here are ten fun facts about cats you might not know.

1. Cats sleep between 16 and 20 hours in a day. That means they sleep at least 2/3 of every day, and that a nine year old cat has only been awake for three years of its life! Furthermore, they spend about 1/3 of their waking hours cleaning themselves.

3. A cat can hear high-frequency sounds up to two octaves higher than a human.

4. A cat can leap up to five times its own height.

5. The Singapura is the world's smallest cat breed, and an adult Singapura can weigh just 4 pounds. The Maine Coon cat is the largest, and males often weigh 25 pounds or even more.

6. Cats rarely meow at other cats, just at humans.

7. Cats have 32 muscles that control their ears, and can rotate its ears 180 degrees. A human only has six muscles controlling the ear.

8. A cat's nose print is unique, just like a human's fingerprints.

9. An average cat can run at around 30 mph over short distances.

10. Allegedly, the church condemned cats as evil during the time of the Spanish Inquisition. This resulted in a wide-spread killing of cats, followed by an explosion of rats and other small animals the now dead cats would have killed. This, in turn, helped the Black Plague spread, and the disease killed around half of the population in Europe.

Do you have a fun cat fact that should be added to the list?