Dog of the Month: Norrbottenspets

The Norrbottenspets is an ancient Swedish breed whose original purpose was as farm and hunting dog. It's also known under the name Nordic Spitz. The oldest known documentation of the breed is from the 17th century, but it's likely they were around even earlier.

This breed stems from northern Sweden and Finland, and the countries sometimes argue about the true origin. The Nordic Spitz has spend ample time in both countries, and to make it more complicated, the borders have changed many times in the past.

By the end of the first World War, the breed was nearly extinct. Only a few dogs remained, and enthusiasts started a breeding program to save them. Since the gene pool was so small, breeding is highly controlled and to this day great care is taken to only breed healthy individuals that can't be closely related.

The Nordic Spitz is still a rare breed. There are around 1,200 individuals in Finland, around 1,000 in Sweden, and a few hundred in Canada and the USa.

They are popular for hunting grouse and fox, but some dogs will tousle with animals as large as moose and bear. The Norrbottenspets is known to be intelligent, strong, and fast. They are active and like to have something to do, and many excel in sports.

This is a very healthy breed. Of the 100 most popular breeds in Sweden, the Nordic Spitz is statistically the healthiest, and they generally live well into their teens. 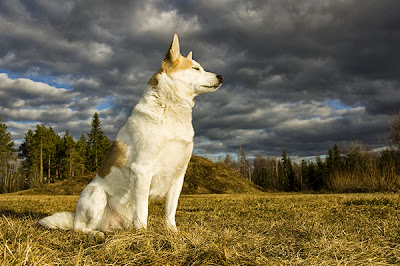