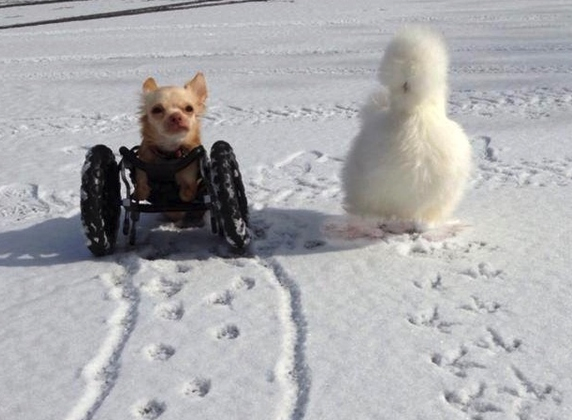 Many animals pass through the Duluth Animal Hospital, but few get the attention of Roo - the two legged Chihuhua - and Penny the chicken.

Penny was rescued from an experiment when she was nine weeks old. The experiment had ran its course and that was pretty much it for the fluffy bird. Luckily for Penny, Alicia Williams spotted her and asked if she could take Penny home.

After a while Penny got bored with being home alone, so her new human brought her to work. Penny even lays eggs a few times a week.

Roo was found outdoors at the tender age of seven weeks. He was born without front legs and dumped in a park where a good samaritan found him. Today, he too is adopted by Williams, and Penny is his best friend.

People come in to Duluth Animal Hospital just to see Penny and Roo, and many schedule their appointments around the duo's schedule to make sure to meet them.