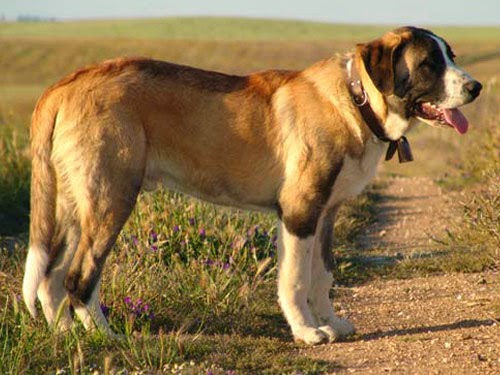 The Rafeiro do Alentejo - or Alentejo Mastiff - is a Portuguese breed of dog developed to protect herds of cattle. These dogs are very large, and believed to have developed from the ancient molosser type dogs that came to Europe from Central Asia thousands of years ago.

Rafeiro do Alentejo are known to be self confident, somber, calm, and independent. They are not aggressive, but will bravely protect sheep, cattle, households, and families they feel are under their protection. The puppies mature slowly, and this combined with the independent nature of the breed can make them a challenge when young.

It's important to watch over these dogs as puppies. They tend to over exert themselves with jumping, running, and climbing stairs.

These dogs are affectionate with their family and generally patient with children, but also suspicious towards strangers. They are particularly alert during night time. As with all breeds, proper socialization and training are important. Training takes a lot of patience and consistency; the dogs are eager to receive affection, but developed to make decisions on their own. They won't cater to a human's every whim; they prefer to save their energy for doing real work.

Rafeiro do Alentejo shed heavily twice a year and need thorough brushing at that time. The rest of the year they require little grooming. They don't need excessive exercise, but appreciate a longer daily walk or jog.

In today's world, the breed's traditional job has disappeared, and the dogs are rare even in their home country. They're included in the Foundation Stock Service of the American Kennel Club, and fully recognized by the United Kennel Club.