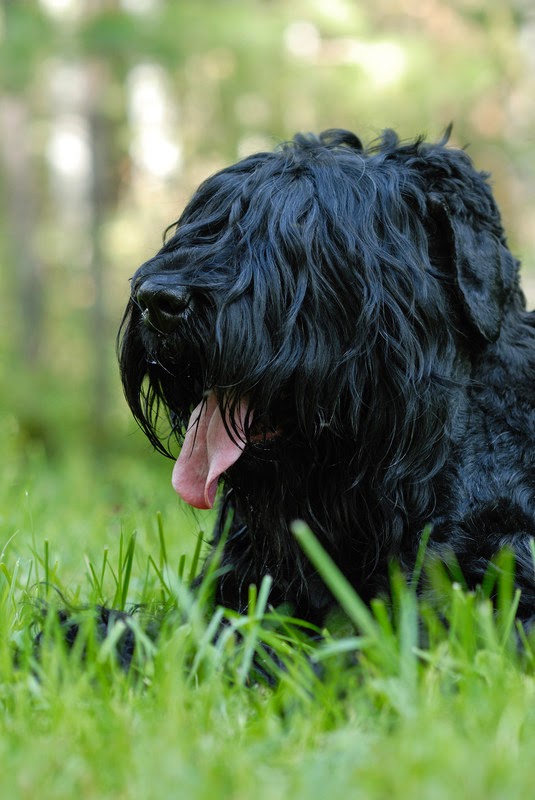 The Black Russian Terrier was developed in the Soviet Union after the second world war. It is considered a working dog, and the breed is robust, large and powerful.

After WWII, it fell on the state operated Red Star kennel to provide dog for the Soviet Union's armed services. They needed strong, large, and unpretentious dogs to serve the country's needs. The dogs also had to be intelligent and easy to train, and they could not require extensive coat care. The result turned into the Black Russian Terrier, believed to stem from a mix of Rottweilers, Giant Schnauzers, and Airedale terriers.

The breed has a strong instinct to guard and protect. They are typically loving towards the family, but reserved with strangers, and due to the strong guarding instinct early socialization is a must.

The Black Russian learns easily and has a great memory capability. For better and for worse; they might remember how to do stuff you don't want them to know. Like raiding cupboards or the fridge... This is a working breed with strong work ethic, and the dogs need something to do. They excel at agility and obedience.

While the breed can have a few gray hairs, their coat is supposed to be black and coarse. These are large dogs, males normally weigh in between 110 and 130 lbs, but some are even larger.

~ Maria Sadowski ~
Posted by PlexiDor Pet Doors at 7:30 AM