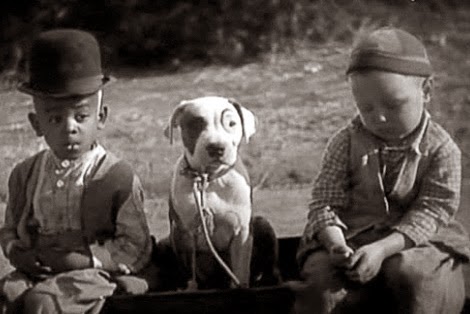 The original Petey was an American Pit Bull Terrier named "Pal the Wonder Dog." He was famous for his role in the Little Rascals, and the trademark ring around his eye was natural almost all the way around.

Pal's career began in a silent movie in 1925, and he played Petey in The Little Rascals until he died in 1930. He was the second highest paid actor on the set. Sadly, he was only five years old when he died - he was poisoned, allegedly by someone with a grudge against his trainer.

Pal's son Pete shouldered the responsibility of The Little Rascals. He was the first dog to have dual registration. He was registered as Lucenay's Peter as a Staffordshire Terrier with the AKC, and as Purple Ribbon Peter as an American Pit Bull Terrier with the UKC.

Since then, there has been re-makes of The Little Rascals, but the ring around Petey's eye remains.