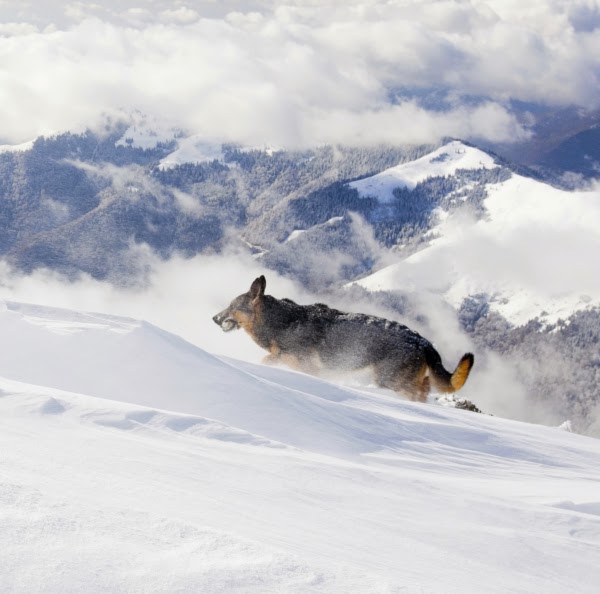 Large parts of the country are covered in snow and ice. This is inconvenient for humans, and can be outright painful for dogs.

Some dog owners reason that it's natural for dogs to be outside in the snow, and that wolves are outside in the snow all winter long. The problem with this is that humans have created an artificial environment where dog's feet come in contact with substances that don't exist in the forests where wolves run.

Most northern dog owners are aware of lumps of snow catching on their dogs' paws. It is less known that most de-icers are toxic to dogs. A sidewalk that looks clean and pleasant might be covered in salt or other chemicals which can hurt the dog's feet. The paw pads can dry out and crack, they can get frostbite, and chemical burns.

What can dog owners do to protect their pooches?

Dog booties make great winter protection and work against both frostbite and salt. As a bonus they also give some protection against the burning hot asphalt in summer. Using the booties can take some practice. Praise the dog for having them on, start with short periods of time inside the house, and gradually increase the length of time. When it's time to move the training outside, start with short walks.

If booties isn't an option, there is paw wax specially formulated to create a barrier between the dog's paws and whatever might be on the ground. This might not be as effective as boots, but it is definitely better than nothing at all.

When the walk is over, whether the dog wears boots, wax, or nothing, it is important to wash the paws with warm water at once. If they're given a chance to lick their feet they might ingest salt and other dangerous chemicals.

Good to know: Dogs are susceptible to both frostbite and hypothermia. Use common sense and watch out for the dog shivering, appearing anxious, or moving slowly.