Puppies - and some things you might not know about them. 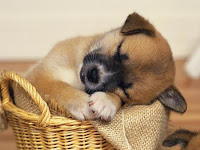 Every person has been a child, and every dog has been a puppy. While the species have many interesting similarities, there are differences as well.

Did you know that when puppies are born, many of their organs aren't fully formed yet? This includes the brain, and puppies are fragile. They spend the first few weeks of their lives developing rapidly.

Puppies are born with their eyelids shut, because their eyes aren't fully developed yet. A newborn puppy's eyes are extremely fragile. Never attempt to open a puppy's eyes - they're sensitive to light and can sustain eye damage for life.

Newborn puppies are also deaf, and relative silence is crucial for their developing ears. If you force the puppy's ears to respond to sound inputs before they're fully developed it could cause great damage.

It usually only takes a couple of weeks until the pup's eyes open and they hear well. They still should not be removed from their mother until they're at least eight weeks old! Some animals are born with the ability to leave their mothers right away. Dogs need their time with their mom in order to develop and be taught.

If you want to read more about this, check out this great article at psychologytoday.com
Posted by PlexiDor Pet Doors at 6:30 AM