Gardening time? Watch out for the cocoa mulch. 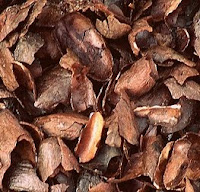 Most people know chocolate is dangerous for cats and dogs. Less known is that cocoa mulch is dangerous to pets if they eat it.

I thought cocoa mulch got the name after its color. It's actually made from leftovers from the cocoa bean roasting process. It's environmentally friendly, looks and smells good, and it is extremely toxic to dogs and cats.

The Saturday Evening Post sported an article a couple of years ago, interviewing Dr Maureen McMichael. She explains, "Cocoa mulch is significantly more toxic than milk chocolate or even baker's chocolate, because it has quite a bit more theobromine." (Theobromine is the toxic compound in chocolate.)

To make matters worse, once a dog starts eating the mulch, they generally don't stop. That means that they can eat a lot of mulch.

The website healthy pets gives an example of toxicity. The example is based on a 50 pound dog.


Vetstreet summarizes: pet owners shouldn't use cocoa mulch in their yards. You can't change what your neighbors use on their properties, but keep your dog on a leash and make sure they don't eat it.

If your pet finds a way to eat it anyway, take him or her to the veterinarian. Disasters tend to happen after hours, but most cities have pet emergency clinics.

It's a great idea to look one up and have their number programmed in the cell phone before something happens.
Posted by PlexiDor Pet Doors at 6:30 AM