BlogPaws: The door prize was a door

Last week, a friendly Sheraton hotel opened its doors to welcome the 2013 BlogPaws Conference. The conference was sold out, and the hotel was crammed full with people, dogs, cats, ferrets, rabbits, you name it. For a pet lover, it was an amazing experience.

PlexiDor had a booth, and I was delighted to get the opportunity to come meet so many of my online friends.

A downside with only knowing people online is that it's hard to recognize them in real life. Many bloggers use their pet's image, and many twitter accounts have a logo or a pet avatar. Some solved the problem through carrying cardboard images of their pets. I attempted to read as many badges as possible so I wouldn't accidentally miss talking to someone, but I've still messed up who is who in my head.

I attempted to assist with putting up the booth, but to be honest, I don't think I helped much. I put the door-holders together upside down...
Eventually, it took shape, and we were ready.

In my experience, it's rare to find a hotel brimming with animals. I loved hearing a dog bark every now and then, and meeting all sorts of animals sure made every day a good day!

They were in unexpected places too. It's not every day you see this sight when entering a restroom!


Even the signs were adorable. No matter how preoccupied you are, a paw pointing towards "nom nom" makes the message clear. The floors were marked with paw prints showing the way to the exhibit hall and other things. 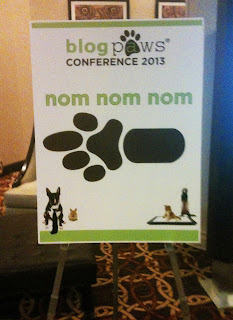 We had a raffle; one lucky winner would get the PlexiDor of their choice.

Marie had been past the booth several times, looking at the doors. She has Great Danes, and would definitely need an extra large door. It's great to have a giveaway when the person who wins is happy to win, and Marie's smile and enthusiasm made the day for all of us!


I too returned home with treasure in the form of a suitcase filled with doggie goodies and new products.  A definite highlight of my visit was meeting Dino Dogan, the founder of Triberr. He was fantastic, and I returned to the booth slightly star struck. I will talk more about BlogPaws and the fantastic people, pets, and companies I met during the upcoming week.

Email ThisBlogThis!Share to TwitterShare to FacebookShare to Pinterest
Labels: 2013 shows