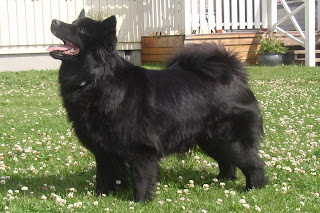 The Swedish Spitz (Svensk Lapphund) is an old breed, first mentioned in writing in 1621. It is believed to be the common ancestor of all spitz dogs, descended from the arctic wolf and the 7,000-year old Varanger Dog originally discovered in northern Norway.

The Swedish Spitz is known to be hardy, alert, easy to train, and courageous. They are extremely loyal to their owners and can be suspicious to strangers. They're often used as guard dogs

These are active dogs that require exercise and room to run. They also need regular brushing and combing. They normally grow to a height of 18-20 inches, and weigh between 33-44 lbs.
Posted by PlexiDor Pet Doors at 6:30 AM