It's that time a year again: holiday. We've written about dangers to doggies earlier on the blog, but it's worth repeating. Danger lurks in unexpected places, and Easter is a holiday with an abundance of food and candy. Never underestimate a dog's ability to get into stuff they shouldn't have!

Chocolate is good, right? Well, not if you're a dog, and during Easter, there's usually a lot of it around. Chocolate contains a substance called theobromine. This is a cardiac stimulant that doesn't affect humans much, but it can be lethal to a dog. The dog can seem perfectly fine up to several hours after eating chocolate, and death can still ensue within 24 hours.
A dog that has eaten chocolate can exhibit symptoms that include: staggering, problems breathing, vomiting, diarrhea, tummy pains, tremors, fever, seizures, and coma. Milk chocolate contains the least cocoa and is the least dangerous. Dark chocolate is really bad.


Both cocoa powder and cooking chocolate are chocolate. They don't taste as good to us, but that's just because it's more concentrated. These forms are even more toxic than your run-of-the-mill candy bar, and contain ten times more theobromine than milk chocolate.

A small dog can get really sick from just licking chocolate icing. A twenty-two pound dog can become seriously ill or even die from as little as two ounces of cocoa powder. 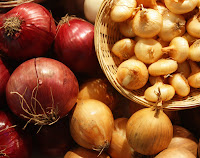 Onions seem harmless, but both onions and garlic contain a substance called thiosulphate.

The poisoning might not show until days after the pet ate onion.

Onions can be difficult to watch out for because they're hidden in all sorts of food. Watch out for onion dip, chips, left over pizza, commercial baby food with onions, chinese food, gravies...

Some dogs react very badly to certain species of mushrooms. Symptoms include tummy aches, drooling, liver damage, kidney damage, vomiting, diarrhea, convusions, coma and... death. Not all dogs and not all mushrooms, though. 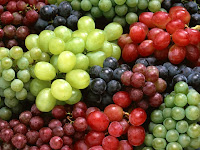 Most dogs love grapes and raisins, but they're bad, bad, bad. Some dogs don't seem to react at all, others get violently ill from just a handful. Don't gamble, give your dog something else. Symptoms include vomiting, diarrhea, abdominal pains, and lethargy.

(Grapeseed oil, used in many paw revitalizers, is poisonous to many other animals, but dogs don't seem to react to it.)


These might not kill your dog, but they do have high levels of phosphorous and can lead to bladder stones. Dogs get muscle problems, weakness, and even paralysis of their hind legs. Affected dogs are often unable to rise up.
Posted by PlexiDor Pet Doors at 6:30 AM