The show is intended for industry professionals and grows every year. According to the Global Pet Expo website, this year presents 990 booths showing everything from pet beds to aquariums.

To me, almost a thousand booths sounds incredible, and it inspired me to look up some numbers. According to the 2011-2012 APPA National Pet Owner's Survey, 62% of US households own a pet, of some sort. This is approximately 73 million homes.

The survey breaks ownership down in some interesting numbers.

The large number of pets is starting to affect businesses not traditionally geared towards this market. Many hotels across the country are installing new pet-friendly policies that include everything from pet pillows to gift packages with pet toys and treats. There are cat and dog spas, pet massages, and pet seat belts. Many companies one wouldn't associate with pets - like Harley Davidson and Old Navy - carry lines of pet products such as brand-name toys, gourmet treats, and clothing. 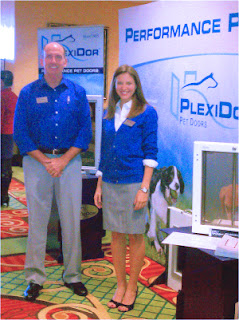 If you visit the Global pet expo, PlexiDor representatives Maya and Robert will be there to greet visitors and show the doors in action. The are at booth 1155 and love company, so if you're there, stop by and say hi to them!
Posted by PlexiDor Pet Doors at 10:58 AM

Email ThisBlogThis!Share to TwitterShare to FacebookShare to Pinterest
Labels: statistics